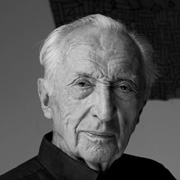 « One day I was painting, black had invaded the whole surface on the canvas, without forms, without contrasts, without transparencies. (…) I saw the negation of black color. The differences in texture reflected light and clarity with more or less intensity and pictorial light came from dark, with an emotional power that made me want to paint. My tool was no longer black color, but this secret light coming from black »

Prehistoric and Romanesque heritage of Pierre Soulages’s birthplace, the southern city of Rodez, France, inspired the artist. In 1938, he studied at the École nationale Supérieure des Beaux-arts in Paris, but, disappointed by the traditional instruction delivered, he quickly moved back to his hometown. Between 1939 and 1940, he served in the French army and after having worked few years as a farmer in Montpellier he settled in Paris where he was able to devote himself to painting. Soon, he became known for his broad strokes of paint that created a tonality of light and dark. He exhibited at the Salon des Indépendants in 1947 and widely since his first solo show at the Galerie Lydia Conti, Paris, in 1949.

He is one of the major members of the Young School of Paris and European Abstract Expressionist movement. His gestural abstraction echoed the Abstract Expressionist movement emerging at the same time in America. His work was influenced by East Asian calligraphy, which Soulages learned while traveling in Japan. In the late 1970’s the self-taught painter created larger-scale compositions and began his series of works characterized by their thick black—he called « outrenoir » (beyond black)— brushstrokes on canvas.

Soulages is the first contemporary artist to be shown at St. Petersburg’s Hermitage Museum in 2001. In 2009/2010, on the occasion of his 90th birthday, the Centre Pompidou in Paris organized a retrospective of his works. In 2014, the Soulages museum opened in Rodez thanks to a donation made by the artist and his wife of 500 artworks.